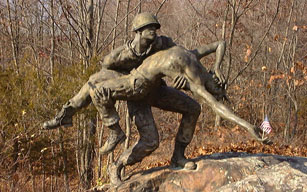 Lasdon is home to four memorials and a museum that honor all Westchester County servicemen and servicewomen who have served their country in various branches of military service. They were funded through the efforts of the Vietnam Memorial Committee and the Vietnam Veterans of America, Westchester Chapter 49.

Trail of Honor
The Trail of Honor comprises a series of 12 stone cairns that display the busts of combat soldiers from every major American conflict, dating from the American Revolution through Operation Desert Storm.

Vietnam Veterans Memorial
At the end of the Trail of Honor is the Westchester Vietnam Veterans Memorial, a sculpture that is comprised of three seven-foot bronze statues that depict a soldier carrying a wounded comrade, with a nurse reaching out to assist them.  Nearby, a flagpole is set on a base with inscriptions of Westchester County servicemen and eight women nurses killed in Vietnam. A cobblestone walkway encircling this memorial affords breathtaking views of the Muscoot River.